Feature: What Makes “The Good Place” So good? 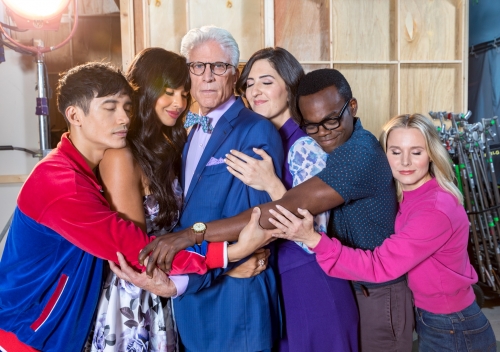 How do hands move in heaven? Ted Danson knows. Watch him in “The Good Place,” NBC’s circle-squaring philosophical sitcom about life, death, good, evil, redemption and frozen yogurt. As Danson speaks, his hands flutter and hover in front of him like a pair of trained birds. They poke and swirl, pinch and twist. They snap suddenly ahead to accent a word as if they’re plucking a feather from a passing breeze. Danson is tall and slim — he was a basketball star growing up — and his hands are expressively large. He can move them, when he needs to, with the long-fingered languor of Michelangelo’s God reaching out to touch Adam. On the show, Danson plays an “architect” of the afterlife named Michael, a sort of immortal Willy Wonka who dresses in bright suits and bow ties. He is always flying into spasms of delight over the fascinating novelties of human culture — paper clips, suspenders, karaoke, Skee-Ball — and in one scene he gets so celestially excited that he lunges into a squat, holds his arms out in front of him and gyrates his wrists like an electric mixer on full blast. “How do you pump your fist again?” he asks. “Is this it?”

Danson is now 70, roughly twice the age he was when he started on “Cheers,” and he carries his seniority around as if it were the funniest thing in the world. In recent years, he has put together a virtuosic run of performances, including supporting roles in shows such as “Damages,” “Bored to Death” and “Fargo.” His turn on “The Good Place” seems like a culmination of this late-phase greatness: a role he was born, and then very carefully aged, to play. Although Danson still has the seductive good looks of Sam Malone, his hair has gone chalk white, and he delivers his lines with an ease so deep it looks effortless and instinctive — the kind of thing you couldn’t practice if you tried. [Source]