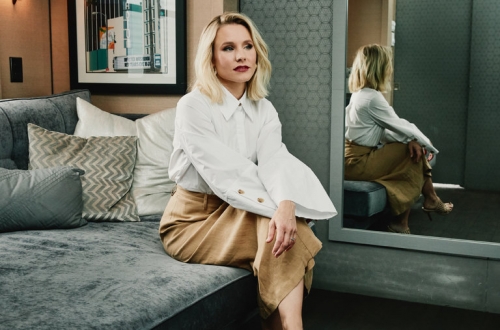 When we last saw Veronica Mars, the greatest private investigator Southern California has ever birthed and tanned — shut it, Philip Marlowe — she had ducked a corporate law job and returned to Neptune, her beachside hometown, resolved to defend the weak, defy the powerful, wisecrack with the best of them. Happily ever after, on her terms.

But why be happy when you can be hard-boiled? As Veronica’s inventor Rob Thomas said, “Happy and noir don’t go well together.”

“Veronica Mars,” a snappy, sophisticated crime drama about a high school P.I., debuted in 2004 and ran for three critically celebrated but lightly watched seasons, first on UPN and then on CW, returning in 2014 for a fan-funded movie.

That seemed to be the end of it. Its star, Kristen Bell, continued a successful film and TV career. Thomas went on to create and run “iZOMBIE.” But you know the noir trope where a character thinks she has outrun her past and then the past comes on at a sprint? It applies.

In a genre-appropriate twist, the show is back, revamped for the streaming age. An eight-episode fourth season will drop on July 26 at Hulu, where the first three seasons are already available.

Reboots and revivals are as thick on the ground as Neptune beachgoers. A long-gone show that returns after so many years with its original cast, led by Bell’s Veronica, and its distinguishing style (think Dashiell Hammett after a few blender drinks) mostly intact? That’s rarer, and not without its dangers.

Continuing a beloved series after so many years risks tarnishing its legacy. (If we’re being honest, the uneven third season was risk enough.) Besides, how do you make a show about a child prodigy when that child prodigy can apply for a fixed-rate mortgage?

The season’s big mystery, according to Thomas: Is a 30-something Veronica Mars “an interesting enough character on her own to continue to attract fans?”

A few weeks ago, I met Bell on a gloomy June afternoon in her trailer on the Universal lot, an overheated box befrilled in demoralizing beige. She was in the middle of a shoot for her other show, “The Good Place,” and had two caffeinated drinks going, which partly explained the pep. (The messianic zeal she feels for Veronica explained the rest.) In her costume, a lilac sweater over an embroidered blouse and green chinos, she looked about as noir as an Easter basket.

And yet “Veronica Mars,” she said, is the show that launched her, that shaped her, that taught her comedy and responsibility and a commitment to social justice. She will quit it, she said, when everyone in Neptune is dead.

“That’s when I’ll do it,” she said, pushing her cane-sugar soprano into a lower register. “That’s when I will let her go: When the last body is buried.”

“Veronica Mars,” which The Times described, on a list of the 20 best TV dramas since “The Sopranos,” as “a peerless blend of neo-noir mystery and teenage romantic drama,” was always a show ahead of its time. Its heroine, 17 when the show began, looked like a Barbie and scrapped like a G.I. Joe. She was as quick with a comeback as with the Taser she called Mr. Sparky, but still vulnerable to problems personal and systemic.

More politically minded than your average teen soap, “Veronica Mars” had love triangles and cliffhangers and, from its first episode, a sustained interest in wealth inequality. In its depiction of gendered violence, it anticipated much of the #MeToo conversation.

“It continually kept questions about gender inequality in view,” said Susan Berridge, a lecturer in media at the University of Stirling who has written about the series. “There were so many story lines involving sexual violence and other forms of gendered abuse that it became impossible to see these issues as one-off aberrations.” [More at Source]