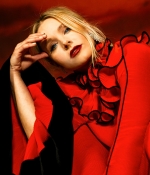 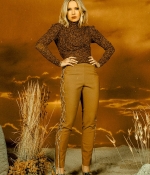 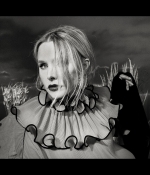 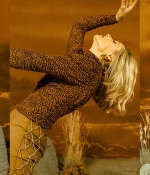 Say you’re Kristen Bell. Say you’re on a daylong photo shoot, in the middle of capturing the fifth look — a sleek Versace number that’s emerald and gold; your hair perfectly poufed; your makeup flawless. You’re cheerfully giving everything you’ve got, even though it’s been several hours of this already, because that’s what you do. Then, suddenly, someone accidentally knocks over one of the plants near you on set. Do you: a) ignore it and keep posing; b) start screaming at the crew, how dare they, do they even know who you are?; c) squat in your stilettos and start cleaning up the mess as the crew rushes to help you, and then grab a broom and take it upon yourself to tidy up the floor, laughing and making jokes and even dancing around for a second, as people crowd around to snap photos of you being so absolutely Kristen Bell?

WWKBD? The answer, of course, is C. And here, you might say, is the crux of Bell — a woman whose natural effervescence is such that despite being the cherished hero of a beloved cult television show, it was a video of herself melting down over a sloth on Ellen that really, truly, endeared her to the larger world. Kristen Bell is the hardest working woman in the room, but you wouldn’t even guess she’s not here just to have a good time. And that may be one of her greatest powers.

She’s a woman of contradictions: Bell breathlessly pivots between froth and seriousness, jokes and sincerity, cleaning up a fallen plant while wearing 3-inch heels. It’s a quality that extends to her on-screen roles. In her existentialist NBC sitcom The Good Place, which is heading into its fourth and final season, Bell’s character is a bad person learning to be good. In Veronica Mars, which returned for a fourth season on Hulu 12 years after it was canceled, she’s a hard-nosed detective on the outside and a marshmallow on the inside. In Frozen 2, the sequel to the 2013 blockbuster Disney hit, out in November, she’s happy-go-lucky Princess Anna, a girl who copes with the pain and alienation of her life with a song. (Yes, she can sing, too.) Her career is full of performances that blend the sad and happy, highs and lows. As a person, she embodies the same. “It is a paradox because I was given this package, this is the bottle of molecules I was given, and it looks to be something that it’s not,” she says. “It’s why it’s funny when I swear. You just don’t think a little girl like this is going to swear at you that much.” [More at Source]