Feature: Kristen Bell and Kirby Howell-Baptiste for the LA Times 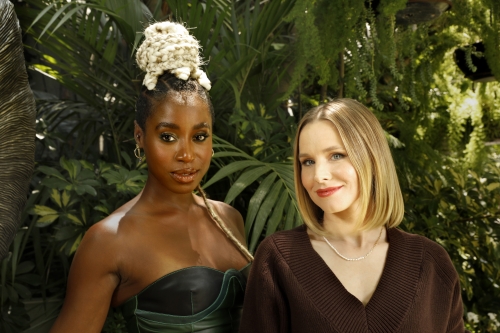 The friendship meet-cute between Kirby Howell-Baptiste and Kristen Bell barely registered the first time they crossed paths. Howell-Baptiste was filming a guest spot on Showtime’s “House of Lies” — which featured Bell — and knew her lines so well, the scene the two shared didn’t take long to complete.

Bell’s face twists thinking back on it: “I was about 13 months pregnant.”

“We genuinely met for an hour when we shot the scene,” Howell-Baptiste adds. “It was very quick. I was in and out.”

Their story really starts, as they both tell it, six years later on “The Good Place.” Bell played Eleanor Shellstrop, the self-centered and foul-mouthed deceased protagonist of the NBC afterlife comedy. Howell-Baptiste joined the series in its third season as a bubbly neurosurgeon, Dr. Simone Garnett, who makes an impression on the ever-indecisive Chidi (William Jackson Harper). The following year, in 2019, Howell-Baptiste joined Bell in Hulu’s revival of “Veronica Mars,” the cult teen detective drama that was Bell’s breakthrough role.

“We killed someone together between ‘The Good Place’ and ‘Veronica Mars’ — we were both at fault. In order to keep the secret, we have to keep this going,” Bell teases.

There’s a reason Bell is making quips about crime. The pair are currently starring as crooked coupon buddies in the crime comedy “Queenpins,” written and directed by husband-and-wife duo Aron Gaudet and Gita Pullapilly; it’s now in theaters and drops later this month on Paramount+. Bell and Howell-Baptiste play coupon-loving friends: Bell is Connie, a former speed-walking Olympian who copes with an unfulfilling marriage and infertility by couponing; Howell-Baptiste is Jojo, a friend and neighbor trying to find success as a coupon influencer. The friends break bad … nicely, turning their enthusiasm for savings into a Robin Hood-esque scheme bilking millions from corporations to deliver deals to fellow coupon clippers. [more at source]