Video: “The People We Hate At The Wedding” Official Trailer

News: Kristen Bell joins “The People We Hate at the Wedding”

Kristen Bell is joining Allison Janney and Ben Platt to star in The People We Hate at the Wedding, a comedy that sees Amazon Studios partnering with FilmNation to produce.

Adapting the novel by Grant Ginder, the comedy will be directed by Claire Scanlon and has a script by Lizzie Molyneux-Logelin and Wendy Molyneux, who are known for their Emmy-winning work on cartoon series Bob’s Burgers.

The story centers on a pair of struggling American siblings, Alice (Bell) and Paul (Platt), who reluctantly agree to attend the wedding of their estranged, wealthy half-sister in the English countryside alongside their mother, Donna (Janney). Over the course of the wedding week, the family’s many skeletons are wrenched from the closet, and the unlikely reunion gives everyone the motivation to move their own lives forward.

The companies see this as a modern wedding comedy with broad appeal, hitting anyone with a slightly dysfunctional family or anyone who’s been forced to attend a wedding they tried to avoid (which they hope is pretty much everyone).

Principal photography is due to commence September in London. Ashley Fox of FilmNation Entertainment and Margot Hand are producing. [Source]

I’ve updated the gallery with stills, posters, on set pictures & high quality screencaptures of Kristen in from her Netflix movie Like Father. 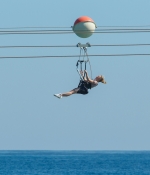 Netflix have released a trailer for Kristen’s upcoming movie with them titled Like Father. Check out the trailer below and head to the gallery for the released stills.

I’ve updated the gallery with HQ screencaptures of Kristen in a A Bad Moms Christmas. Cartoon Network’s Teen Titans Go! is arguably the most entertaining superhero show on TV (and inarguably the most divisive), but now Warner Bros. has confirmed that it’s bringing the songs about waffles, the important lessons about real estate, and the very rare instances of actual crimefighting action to theaters with Teen Titans Go! To The Movies.

Before now, the studio had only offered vague teases about the project’s existence, but a Twitter account launched today that revealed the movie’s full title and main voice cast. The core Teen Titans cast will thankfully be there—meaning each use of “booyah” will sound the way it’s supposed to—but the cast list also featured two new names: Will Arnett and Kristen Bell. [Source]

I’ve updated the gallery with stills & screencaptures of last week’s amazing episode of The Good Place. The season is shaping up to be amazing with the plot twists. And on top of that I added some missing files all over the place in movies, photoshoots and additional stills. Gallery Update: ‘How to Be a Latin Lover’ Blu-Ray Release

Kristen’s latest movie How to be a Latin Lover is available on DVD, Blu-Ray and On Demand as of today! You can buy it on various online stores and rent it on iTunes as of August 15. I’ve updated the gallery with high quality screencaptures of Kristen in the movie.